Millions of bats are estimated to have died in 16 states in the U.S. and four provinces in Canada, according to the U.S. Fish and Wildlife Service.

Bats with White-nose syndrome exhibit odd behavior during the winter months, including flying outside during the day.

White-nose syndrome is caused by an aggressive fungus called Geomyces destructans that eats through the skin and membranes of bats. The disease was first detected in a cave in New York state in 2006.

Biologists report mortality rates of 90 percent to 100 percent at some sites and expect the disease to keep spreading through several species, including some that are endangered.

Bats provide tremendous value to the U.S. economy as natural pest control for American farms and forests every year, while playing an essential role in helping to control insects that can spread disease to people,” Fish and Wildlife Service Director Dan Ashe said in a news release.

Bats are natural insects predator, prying on insects that feed on agricultural crops and forests.

A reproductive female bat consumes bugs each night and a colony of 150 brown bats can eat enough adult cucumber beetles to prevent the laying of eggs that result in 33 million rootworm larvae, according to a study cited by Bat Conservation International.

Biologists said the bats’ dwindling population could affect ecological balance if their demise results in the proliferation of the insects they feed on, and would cause food prices to go up if food crops are devastated.

“White-nose syndrome has spread quickly through bat populations in eastern North America, and has caused significant mortality in many colonies,” US national White-nose syndrome co-ordinator Dr. Jeremy Coleman said in a statement.

The rapid spread of the disease has also challenged officials’ population estimates.

Mylea Bayless, conservation programs manager for Bat Conservation International in Austin, Texas, said, “Unlike some of the extinction events or population depletion events we’ve seen in the past, we’re looking at a whole group of animals here, not just one species. We don’t know what that means, but it could be catastrophic.” 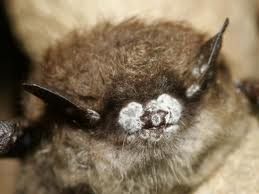