Last year, the top seed made him the first man in the professional event to win in the same tournament six times in a row.

The defending champion, Nadal first broke in the third game when his compatriot netted but Ferrer struck back immediately with his own break of serve thanks to an exquisite drop shot in the final of the first clay court event of the European season.

However, Ferrer’s advantage was short-lived with Nadal breaking next game and winning the first set before seizing the initiative in the second with a superb passing shot only to be broken in the eighth game and then hitting back for 6-5.

Nadal leaped into the air with jubilation when Ferrer hits the net to seal his victory in one of the historic event of his life. 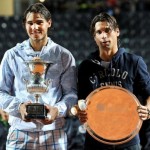