Research published in Neurology showed parts of some patients’ brains had shrunk within ten years period before manifestation of Alzheimer’s would take place.

Brain scans may help indicate potential Alzheimer’s patients years before symptoms appear, according to the results of a study.

There was strong evidence that the disease began to develop in mid-life, according to Alzheimer’s Research UK. Early diagnosis of the disease can be vital in enabling for an effective treatment.

Sixty-five patients, all of whom started with normal brain function, took part in the study at Massachusetts General Hospital and the Rush University Medical Center in the US.

Magnetic Resonance Imaging (MRI) scans were taken and the thickness of regions of the brain were measured.

Twenty per cent of patients with brains of average thickness went on to develop Alzheimer’s. However, no patients with thicker brains developed the disease, while 55% of those with thinner ones contracted Alzheimer’s.

However, researchers suggest that the study needs to be expanded to be certain of the method’s accuracy in predicting Alzheimer’s, and they acknowledge that further work involving many more patients is needed. 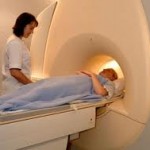