Nadal shattered Djokovic dream aiming to become only the third man in history to hold all four Grand Slam titles simultaneously, since Rod Laver in 1969 to win a fourth straight major.

The Spaniard won a record seventh French Open title after jeopardizing Novak Djokovic’s comeback to win 6-4, 6-3, 2-6, 7-5 in its resumption of play after it has been suspended due to the rain.

The Spaniard broke back in the first game of the day however, and then piled pressure on an unsettled Djokovic.

The Serb finally folded with a double fault to hand Nadal an 11th Grand Slam. The only three men to have more Grand Slam victories include Roger Federer with 16, Pete Sampras on 14 and Roy Emerson on 12 will also now be in his sights.

Djokovic had been threatening a sporting miracle when the final continued in showers and sunshine on Monday, with the top seed leading 2-1 with a service break in the fourth set.

He had trailed by two sets and 2-0 on Sunday before winning eight straight games in an extraordinary turnaround as Nadal moaned to tournament referee Stefan Fransson about playing in persistent drizzle for almost three hours before the match was abandoned for the night.

Nadal broke Djokovic in the first game upon the resumption on Monday to level at 2-2 in the fourth set.

He then took the match on a Djokovic double-fault and burst into tears after three hours and 49 tension-filled minutes, three hours on Sunday and 49 minutes on Monday. 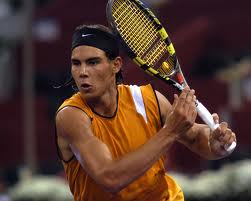