The match up was another classic encounter between two rivals, with the 10-time Grand Slam champion Nadal extending his winning record over Federer to 18 victories in 27 meetings.

The first three games, Federer was spectacular. A routine hold was followed by a break, set up by two thundering backhands. And when he opened the third game with a stop volley and a drop shot it was a sign of oozing confidence.

Federer, aiming for a 17th Grand Slam title, started aggressively , breaking Nadal early to take a 3-0 lead only for the tenacious Spaniard to fight back to take the first set to a tie-break.

The four-time champion looked in control of the match until he relinquished his early break, with Nadal restoring parity in the seventh game.

Federer prevailed to claim the opening set, but Nadal bounced back with vengeance to break his rival in the fifth game of the second set for an insurmountable lead.

With Nadal leading in the second set, the players had to take a 10-minute break for an Australia Day fireworks display, which seemed to affect Federer the most as he dropped his service game.

Federer’s play was becoming increasingly erratic he ended the match with 63 unforced errors compared with Nadal’s 34 as he tried in vain to penetrate Nadal’s stubborn defense.

Both players’ service games faltered in the third set. However, Nadal came out on top despite Federer valiantly saving five set points.

The Spaniard went on to secure a crucial break in the ninth game of the final set to serve for an impressive win, which ended Federer’s 25-match winning run.

Nadal will play either Andy Murray or Novak Djokovic in Sunday’s final. 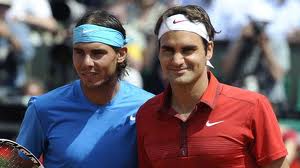