Northern Irishman Rory McIlroy shot a five-under-par 67 to share the lead with Sweden’s Robert Karlsson in round one at Abu Dhabi Championship.

American Tiger Woods is two under after carding a bogey free 70, with Luke Donald of England a shot further back.

McIlroy’s ball-striking was not at its best, but like Karlsson he scrambled brilliantly in his first tournament since recovering from suspected Dengue fever.

Woods was playing his first event since ending more than two years without a victory last month, birdied the 11th, his second hole, and short fourth after hitting his tee shot to within a couple of feet, in a round that contained 16 pars.

Luke Donald, meanwhile, followed eight opening pars with back-to-back birdies, but could not save par from the sand on the 200-yard seventh.

Germany’s Martin Kaymer, the defending champion and winner of this title three times in the last four years, shot a double-bogey six on the first in a round of five over par.

World number two Lee Westwood had four bogeys in his round but four birdies meant he finished the day on level par. 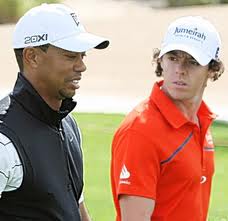