French Open champion Rafael Nadal was defeated by Philipp Kohlschreiber of Germany 6-3, 6-4 in the Gerry Weber Open quarterfinals at Halle.

Kohlschreiber, the tournament defending champion ended Nadal’s 13-match winning streak.
The Spaniard was in difficulty from his first service game and the eighth seed German, wrapped up the first set in just over 30 minutes.

Kohlschreiber had eight aces, ending the first game with his first. He broke Nadal in the next, after the Spaniard saved two break points and intensified the pressure by pulling ahead 3-0. Nadal then wasted three chances to break in game four.

The German missed a chance to break the 11-time Grand Slam champion again in the first game of the second, and defended three break points to hold his serve three games later. Kohlschreiber broke again in the seventh game and quickly moved ahead 5-3.

Kohlschreiber kept calm to seal a fine victory and reach the last four.
It was the German’s first win over Nadal in nine attempts, although Friday’s match was their first meeting on grass.

Kohlschreiber will play Tommy Haas in the last eight after the German beat third seed Tomas Berdych 6-4 3-6 7-5 while Nadal confirmed he would now be heading home to Mallorca to rest ahead of Wimbledon, which starts on 25 June.

The Swiss advanced despite 25 aces by Raonic. The Canadian had 13 aces in a first set he won in a tiebreaker. Federer broke serve early in the second and forced a third set. 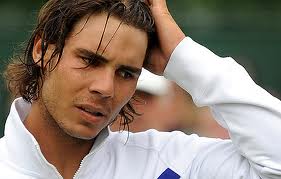