Rafael Nadal will launch on Friday the Davis Cup final by taking on Argentina’s Juan Monaco in Seville.

David Nalbandian, who will be playing in his third final for Argentina, was left out of the singles draw and will instead partner Eduardo Schwank in Saturday’s doubles.

The world no. 2, will open Spain’s bid for a third Davis Cup title in four years.

Together, they have a perfect record in singles matches on clay courts like the ones in Seville: 25 wins and no defeats.

On Saturday, Nalbandian and Schwank will face Feliciano Lopez and Fernando Verdasco. The reverse singles are set for Sunday.

Nalbandian hasn’t played since mid-October, so Argentina captain Tito Vazquez decided to save the 2002 Wimbledon finalist for the doubles, which is where the South Americans may have an advantage.

Just a week after Nadal was complaining about a lack of ‘passion’ when he was eliminated at the group stage of the Barclays ATP Tour Finals, Nadal will be back on Friday and ready to end tough year on a high by spearheading Spain’s bid for glory. 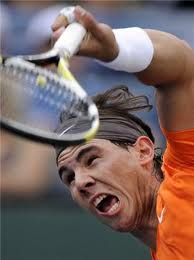