After almost twenty two years since ‘Pretty Woman’ was shown, Richard Gere, who
was the leading actor of that film, recently revealed what was in his mind about the movie.

In an interview by the Australian magazine, he could not hide his true feelings when he astonishingly blasted the movie as a ‘silly’ romantic comedy, despite winning accolades and legions of fans worldwide about his role in ‘Pretty Woman’.

In the movie Gere played as Edward Lewis, a successful bachelor businessman and corporate raider where he hired the services of Vivian Ward, a beautiful prostitute to escort him in social events which was played by Julia Roberts.

The Gere-Roberts tandem was a box-office hit movie of that year grossing an estimated income of US$ 463.4 million worldwide and arguably the most famous of Gere’s career.

The outspoken actor also says the character he played in the movie, Edward Lewis, glorified brash Wall St. financiers, whom he said, ‘It made those guys seem dashing, which was wrong. Thankfully, today, we are all more skeptical of those guys.’

The 62-year-old actor believes his character in the film even helped trigger the worldwide economic meltdown as he revealed it to the Woman’s Day magazine of Australia.

When asked about his love life, Gere said, he has found true love with Carey Lowell, 51, his partner of 15 years and mother of their 12-year-old son, Homer James. 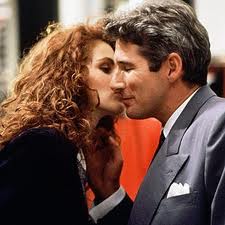