Women approaching menopause hot flashes are of common symptoms and no one should brush it off that memory problems also occur.

What is important that she realizes that there are some cognitive changes that take place during this phase in a woman’s life,’ said study-leader Dr. Miriam Weber.

Scientists find women in their fifties struggle with working memory, which is the ability to take in new information and manipulate it, such as calculating the amount of a tip after a restaurant meal.

‘She can find comfort in knowing that there are new research findings that support her experience. She can view her experience as normal.’

A team from the University of Rochester, in New York, put a group of women aged from 40 to 60 through a battery of cognitive tests.

It analyzed 75 women who were approaching or beginning menopause.

The study is one of only a handful to analyze in detail a woman’s brain function during menopause and to compare those findings to the woman’s own reports of memory or cognitive difficulties.

They underwent a series of cognitive tests that looked at several skills, including their abilities to learn and retain new information, to mentally manipulate new information, and to sustain their attention over time.

Women who had memory complaints were much more likely to do poorly in tests designed to measure working memory.

Scientists also found that the women’s reports of memory difficulties were associated with a lessened ability to keep and focus attention on a challenging task.

Generally anywhere from one-third to two-thirds of women during this stage of life report forgetfulness and other difficulties that they view as related to poor memory.

Dr. Weber has some advice for women suffering from menopausal memory problems.
‘When someone gives you a new piece of information, it might be helpful to repeat it out loud, or for you to say it back to the person to confirm it, it will help you hold onto that information longer,’ Dr Weber said. 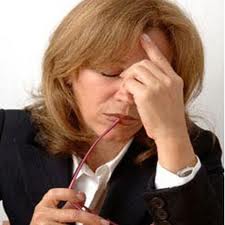