Rickie Fowler defeats Rory McIlroy and D A Points in a playoff to win the Wells Fargo championship.

The trio finished 14 under for the tournament, one stroke ahead of Webb Simpson.

It was Fowler who came out on top in the playoff, his birdies bettering the pars of Points and McIlroy.

Nevertheless, The Northern Irishman did enough to retake Englishman Luke Donald position as world number one.

It was Fowler’s first PGA Tour victory, a breakthrough moment for the 23-year old who has been best known for his bright colored outfit, sporting long hair and a favorite among kids.

Even Fowler and McIlroy are of the same age, McIlroy has a two-year head start on Fowler.

McIlroy turned pro in 2007 while Fowler didn’t turn pro until two years ago. The only other time Fowler won as a pro was last year at the Korea Open, where he also beat McIlroy.

Points could have won the tournament with a par at the 72nd hole but he missed the green, hitting his second shot into a greenside bunker. He was unable to make a four from there.

McIlroy had a chance to win as well with a 15-foot birdie on the 18th hole in regulation but it missed on the left edge.

Webb Simpson, who led entering the final round, finished one stroke behind in fourth place.

Ryan Moore was tied for fifth with Lee Westwood (66) and Ben Curtis (67), who finished before the leaders got to the back nine. 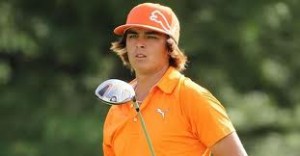