Tattooing is not only a body work of art but also a form of self expression for people who are not afraid to express themselves in projecting their personality.

Tattoos have experienced a resurgence in popularity in many parts of the world coupled with modern equipment used for tattooing, which has led to an improvement in the quality of tattoos being produced.

With its growing popularity, health authorities have anticipated more cases of infection caused by dirty needles and unsanitary conditions which are often to blame to be the primary cause of tattoo infections.

Its demand has added to the risk factors and the safety concerns in various infections of tattooing.

Infections that can be transmitted through unsterilized use of tattoo equipment or contaminated ink and which include surface infections of the skin, hepatitis B, hepatitis C, tuberculosis, and HIV.

Since tattoo instruments come in contact with blood and bodily fluids, diseases may be transmitted if the instruments are used on more than one person without being sterilized.

According to the report the bacteria got into the containers when the manufacturer used distilled or reverse-osmosis water, which is not necessarily sterile. The water was used to dilute black ink into various shades of gray.

The Food and Drug Administration (FDA) does not directly regulate tattoo ink because it is regarded as a cosmetic, but it can intervene when a product has been adulterated or is regarded as unsafe.

The New York cases involved infection with a bug called Mycobacterium chelonae, caused reddish or purple raised bumps in the areas tattooed with gray. The infection can mimic an allergic reaction and be difficult to treat.

The bacteria can cause itchy and painful pus-filled blisters that can take months to clear up, and involve treatment with harsh antibiotics with unpleasant side effects.

Widespread reports of the illness in tattoo customers have been reported over the past 10 years. But they may be growing more common as more people get tattoos, experts said.

Though the risk associated with tattooing persists it could be reduced if the tattoo artists would strictly adhere to hygienic practices to prevent the occurrence of infections.

The tattoo artist must wash his or her hands and must disinfect the area that will be tattooed.

Gloves must be worn at all times and the wound must be wiped frequently with a wet disposable towel of some kind.

The equipment must be sterilized in a certified autoclave before and after every use.

It could be the best option if one get tattooed with a new, disposable sterile needle.

Make sure that the tattoo artist uses fresh ink for each session, placing small amounts in disposable containers, which are specifically used for one client only.

Most importantly, consult a physician, before getting a tattoo done, to get some advice and precautionary measures. 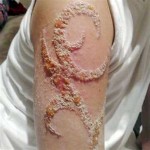