In view of the increasing number of cases of leptospirosis the Department of Health (DOH) is appealing to those with flu like symptoms for more than two days to seek treatment.

Leptospirosis is transmitted by the urine of an infected animal and is caused by exposure to several types of the Leptospira bacteria, which can be found in flooded areas especially in tropical countries like the Philippines.

Many different kinds of wild and domesticated animals carry the bacteria.

These can include, but are not limited to; rodents (mice and rats) cattle, dogs, pigs and wild animals.

The bacteria can enter the body through skin or mucous membranes (eyes, nose, or mouth), especially if the skin is broken from a cut or scratch.

Dr. Eric Tayag, DOH spokesperson and Assistant Secretary, said the DOH noted an upsurge of leptospirosis in the country reaching already to 2,471 cases nationwide which is 62 percent higher compared to the 1,522 cases recorded for the same period last year.

Incidence of Leptospirosis infection among urban children appears to be increasing.

Tayag said with the upsurge they were expecting 50 leptospirosis cases, or flood related illnesses to be brought to hospitals a day.

Based on the DOH conducted quick count this month of August, in 20 hospitals in Metro Manila, 14 from DOH retained hospitals and six local government hospitals, there were 783 leptospirosis cases recorded with 34 deaths, according to Tayag.

The risk of acquiring leptospirosis can be greatly reduced by avoiding in contact with potentially infected animals or avoid wading in flood waters and if they could not help it for one reason or another, they must wear protective boots.

The DOH conducted an emergency meeting with the Metro Manila hospitals, according to Tayag, to assess their capability considering that ‘some hospitals are running out of beds’ not solely due to leptospirosis cases but also the upsurge of dengue, pneumonia and other illnesses prevalent during the rainy season.

Leptospirosis is treated with antibiotics, such as doxycycline or penicillin, which should be given early in the course of the disease.

Intravenous antibiotics may be required for persons with more severe symptoms. Persons with symptoms suggestive of leptospirosis should contact a health care provider. 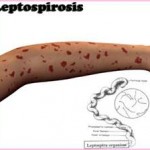