The Canadian singer Bryan Adams, 51, confirmed that he and his personal assistant Alicia Grimaldi are expecting their first child, reportedly to be due in May.

Adams maintains confidentiality about his relationship with Grimaldi, a Briton who graduated from Cambridge University helps Adams in setting up the Bryan Adams Foundation in 2004.

Adams’ spokeswoman declined to comment the status of the couple’s relationship.
“Alicia Grimaldi and I are expecting a baby,” Adams said in a statement. “She helped me start my foundation years ago and it looks like she’ll be running the family now.”

The Grammy Award winner also thanked the fans for their “kind wishes.” 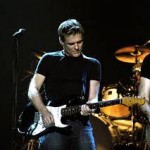