England’s Luke Donald, tied second overnight, could only manage a level-par 72 for 11 under, while Tiger Woods shot 66 to end 10th at eight under.

The big-hitting Johnson led Watney, Donald and another American Matt Kuchar by two shots after round three, and was tied for the lead with Watney heading into the final few holes before ceding the initiative when he made his first bogey on the 16th. 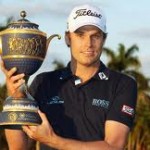