World no. 4, Roger Federer wins 7-5, 6-3 over Spain’s David Ferrer to reach the final of the ATP World Tour.

Federer will face the winner of the other semi-final between Frenchman Jo-Wilfried Tsonga or Czech Tomas Berdych in Sunday’s final.

Should he win the title, Federer will pocket the US$ 1.6 million (£1 million) jackpot for an undefeated champion.

Federer, from Switzerland bidding for a record sixth title at the ATM Tour finals, needed an hour to take the opening set off against Ferrer, but prevailed after breaking through early in the second set.

Ferrer went into the match with a 0-11 record against the 16-time grand slam champion and, though he kept pace with the Swiss in the first set, there was a feeling that he was merely staving off the inevitable.

It took Federer 1 hour and 25 minutes to dispatch Ferrer in straight sets.
The victory will put back Federer as world No 3, moving back above Britain’s Andy Murray who withdrew from the tournament with a groin strain. 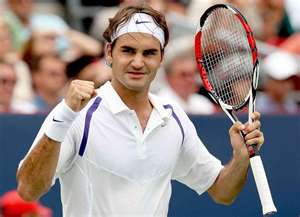