Matt Kuchar and Gary Woodland representing the United States won the World Cup Golf Tournament after they posted a 67 in the final round.

The score achieved by the Americans in the final round made them ahead by 2 shots from Germany and England.

Kuchar and Woodland carded six birdies and a bogey at the Mission Hills Resort on Hainan Island to finish 24 under par to win the title.

Ian Poulter and Justin Rose of England made a strong finish in the tournament after they returned a 63 that featured an eagle, eight birdies and a bogey to end 22 under, tied for second with Germany, who posted a 69.

The American tandem celebrates their victory at Mission Hills after they were confirmed the winner for the World Cup.

The Pair of Rory McIlroy and Graeme McDowell of Ireland, who were the overnight leaders going into the final round manage only to produce an even-par 72 as they missed out on the last day with their score of 21 under par leaving them in a tie for fourth with Scotland, Holland and Australia.

McIlroy and McDowell were of the same situationer in 2009, when they were the overnight leaders then only to be defeated in the final round by Italian brothers Edoardo and Francesco Molinari in Shenzhen, China. 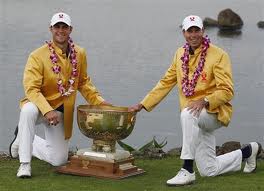