Federer came into the tournament on a 12-match winning streak following titles in Basel and Paris, where he beat Tsonga in straight sets in the final a week ago.

The fourth seed cruised through the opening set, but Tsonga hit back when Federer’s level dropped in the second and the result looked in doubt until the Swiss star broke to edge a tight decider.

A close third set ended when the pressure seemed to get to Tsonga. Trailing 5-4, he was broken at 15 and Federer earned his third straight win over Tsonga since back-to-back losses at Wimbledon and Montreal.

The Frenchman, playing at the O2 for the first time, could draw on his magnificent Wimbledon victory over Federer this summer, when he became the first man to beat Federer at a grand slam from two sets down.

Meanwhile, Rafael Nadal was up against American Mardy Fish in the second match in Group B later Sunday. Group A begins Monday with Andy Murray facing David Ferrer, and Novak Djokovic against Tomas Berdych. 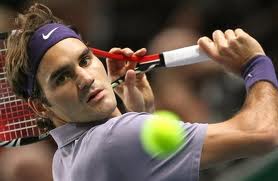