World no. 4, Roger Federer struggles and bounce back to defeat American Mardy Fish 6-1 3-6 6-3 at the ATP World Tour.

The Swiss recovered from a mid-match falter to win and extend his unbeaten run to 15 matches and remain on course for a record sixth season-end title.

Federer had already secured his place in the semi-finals with Tuesday’s stunning win over Rafael Nadal.

Fish, meanwhile, hoped to mark his final match of the year and Thanksgiving in his native United States with a first win at this level and only his second in eight meetings with Federer.

It looked like being a very unhappy Thanksgiving for the American as Federer broke serve straight away and dominated the first set, but the second was a different story.

The 29-year-old American broke for the first time in the fourth game and had chances in all Federer’s service games, with the Swiss understandably not hitting the heights he found against Nadal.

Federer, who is looking for a record sixth title, beef up the bar of his game at the start of the third set, and once he moved into a 3-0 lead there was no way back for Fish.

The victory was Federer’s eighth in a row at the tournament after he went through last year’s event unbeaten, while he also made it 15 successive victories since the US Open. 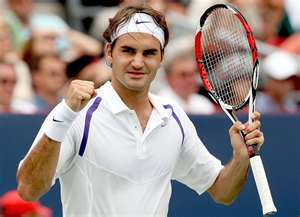