Tommy Haas of Germany ended his three year title drought when he defeated Roger Federer 7-6 6-4 in the Gerry Weber Open final at Halle.

Haas last captured a title at the same grass court venue in 2009.

The German, who is now ranked 87th, had declared himself ‘mystified’ with his unexpected passage to the final.

Haas was even more surprise of having beaten his 30-year-old Swiss opponent who was the overwhelming favorite to win a sixth title at the Wimbledon warm-up event.

Haas’s win also snapped a 10-year losing streak against Federer, with the Swiss having won their last nine meetings dating back to the 2002 Paris Masters.

The 16-times grand slam champion is unlikely to be too concerned about failing to clear the final hurdle here as he would have fine-tuned his game for Wimbledon during the four matches he has played here.

“I’m very impressed with how he played today. Tommy deserved to win,” said Federer, who had been chasing his fifth title of the season and 75th overall.

Federer has already enjoyed a memorable week at the German town in North Rhine-Westphalia after the main pathway up to the tennis stadium was named after him. 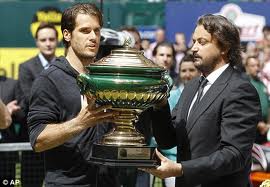