Webb Simpson carded a 68 in the final round of the 2012 US Open at The Olympic Club beating Michael Thompson and Graeme McDowell by one shot.

It is Simpson’s first major championship and third professional victory. He won twice on the PGA Tour in 2011.

He played the final 13 holes in four under par, including three consecutive birdies from No. 6.

Jim Furyk, the 2003 champion, and McDowell began the final round with a share of the 54-hole lead at 1-under 209, four strokes ahead of Simpson. But McDowell carded a 73 and Furyk struggled to a 74.

Both Furyk and McDowell had a chance to tie Simpson at the 72nd hole. Furyk knocked his approach into a left greenside bunker and made a bogey. McDowell’s 24-foot birdie try drifted to the left.

Furyk held the lead most of the day until making a costly bogey at the par-5 16th hole, where he pull-hooked his drive into heavy rough. The poor tee shot led to a 6.

Simpson finally celebrating his victory with his wife, Dowd.

US Open 2012 Final Round Leaderboard: 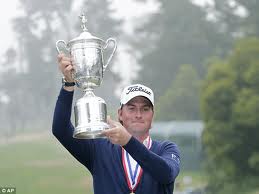