World no.2 Rory Mcilroy was trailing in the opening round of Dubai Desert Classic tournament 3 shots behind leader Rafael Cabrera-Bello of Spain who fired a nine-under-par 63.

The northern Irish sunk seven birdies in his last 10 holes to finish third in the first round of the tournament.

“After a slow start seven under for the last 10 holes was pretty nice,” said McIlroy on his Twitter account.

The US Open champion made a slow start in his pursuit, three-putting from four feet to bogey the seventh, leaving him behind in the chasing pack on one over after eight.

The Spaniard Cabrera-Bello was already nine under par when McIlroy teed off at the course where he won his first professional title three years ago.

But a birdie three on the difficult ninth proved to be the turning point as McIlroy carded 31 on his way back to the clubhouse.

World number four Martin Kaymer matched McIlroy’s 66 after five birdies and a closing eagle in a back-nine rally of his own. 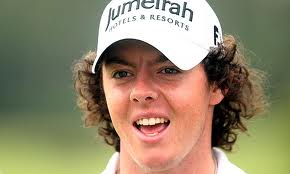