Rory McIlroy became the youngest major champion since Tiger Woods won his first major at Augusta National in 1997. It can be observed that the last four major champions are all in their 20s.

With an impressive performance that McIlroy did in his first major title, the U.S. Open, he has emerged as the favorite to join an elite group of players to capture the U.S. Open and British Open in the same year.

Although British bookmakers have made McIlroy a prohibitive favorite, only six players have won both the U.S. Open and British Open in the same year in the long history of both championships.

McIlroy knew it was quite an achievement, setting scoring records at the U.S. Open and winning by eight shots, Luke Donald who ranks world no. 1, without a major victory to his name believes there is less pressure on him to succeed than there is on the 22 year old Irishman Rory McIlroy.

McIlroy did everything right at Congressional, which is why so much is expected of him. He still believes, like so many other athletes, that the public’s expectations are not as great as his own. Still, this is a different week, and a very difference major.

Even as his celebrity status grows, McIlroy appears to stay grounded. In his final preparation for the British Open, he went to Royal County Down at twilight, carried his own bag and played nine holes with his father tagging along.

It all might appear to be a quite a burden for someone so young, McIlroy doesn’t seem to bother. He is thriving in the spotlight.

On a positive note, McIlroy has acknowledged that the expectation for him is going to be high. “Yeah, expectations are going to be high. I have high expectations myself. I want to go out there and try and win a lot of golf tournaments and win majors and become the best player in the world. All I need to do is focus on my game, and if I can do that, I know my good golf is good enough to win plenty more tournaments,” he said.

Refreshed and recharged after the ten day break since winning his first major, McIlroy is ready to face the challenge. He’s not afraid of the spotlight, and he seems to embrace the pressure.

McIlroy is paired with Ernie Els and Rickie Fowler at British Open. 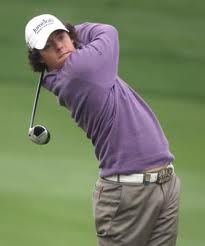