World no. 2 Rory McIlroy of Northern Ireland fires a 66, six under par at third place only two slots behind opening leader Peter Hanson of Sweden with 64, eight under par.

Paul Lawrie of Scotland was second with a 65, seven under par and Sergio Martinez of Spain came third with a 67, five under par.

The European Tour title race looks set to go right to the wire after Rory McIlroy produced a fabulous nine-hole stretch, just as Luke Donald was losing his way.

Even if the 22-year-old McIlroy does win for the second week running, the Race to Dubai crown will only be his if Donald finishes outside the top nine.

The Northern Irishman, despite suffering from the virus and feeling run down is not affecting his golf yet.

‘To be honest, I’m sort of using it to my advantage in a way,’ Northern Ireland’s US Open champion said.

‘I definitely don’t feel invincible, but I feel like every time I tee it up I’ve got a good chance of shooting a good score.

He still reckons Donald has a better short game than him, but it was Donald who came into the event saying that McIlroy had the most talent of anyone he had ever played with.

That sparked some heated debate given that Tiger Woods has won 14 majors and 93 titles as a pro, and Donald’s eve-of-tournament preparations included going on his Twitter site to praise Woods.

McIlroy, no stranger to Twitter controversies himself, was asked for his opinion on the matter.

‘It’s one thing to have talent, but another to actually have the capability of turning that talent into something productive,’ he said.

‘I think what Luke was saying was maybe golf comes as easy to me as it does Tiger, I’ll never know, but Tiger’s won 90 whatever tournaments and 14 majors and that’s definitely more of a talent than (my) five wins.

‘There’s different type of talent. I think what he said was maybe taken a little bit out of context.’ 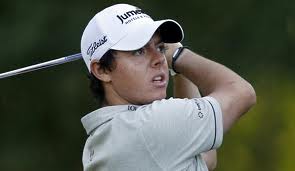