Cells researchers from Oxford University say that a variant gene which reduces vitamin D levels could be directly linked to multiple sclerosis.

Multiple sclerosis (MS) is an inflammatory disease of the central nervous system (the brain and spinal cord).

Although the cause of MS is not yet conclusively known, both genetic and environmental factors and their interactions are known to be important.

UK and Canadian scientists identified the mutated gene in 35 parents of a child with MS and, in each case, the child inherited it.

Researchers say this adds weight to suggestions of a link between vitamin D deficiency and MS.

Oxford University researchers, along with Canadian colleagues at the University of Ottawa, University of British Columbia and McGill University, set out to look for rare genetic changes that could explain strong clustering of MS cases in some families in an existing Canadian study.

They sequenced all the gene coding regions in the genomes of 43 individuals selected from families with four or more members with MS.

This shines more light on the potential role of vitamin D deficiency on increasing the risk of developing MS.

The team compared the DNA changes they found against existing databases, and identified a change in the gene CYP27B1 as being important.

When people inherit two copies of this gene they develop a genetic form of rickets – a disease caused by vitamin D deficiency.

Just one copy of the mutated CYP27B1 gene affects a key enzyme which leads people with it to have lower levels of vitamin D.

The researchers then looked for the rare gene variant in over 3,000 families of unaffected parents with a child with MS.

They found 35 parents who carried one copy of this variant along with one normal copy.

In every one of these 35 cases, the child with MS had inherited the mutated version of the gene.

The likelihood of this gene’s transmission being unconnected to the MS is billions to one against, say the researchers.

He believes that this new evidence adds to previous observational studies which have suggested that sunshine levels around the globe the body needs sunshine to generate vitamin D, are linked to MS.

He maintained that there was now enough evidence to carry out large-scale studies of vitamin D supplements for preventing multiple sclerosis.

Dr. Doug Brown, head of biomedical research at the MS Society, called it an important development.

Paul Comer, from the charity MS Trust, said the research strengthened the case for vitamin D being one potential contributory cause of MS. 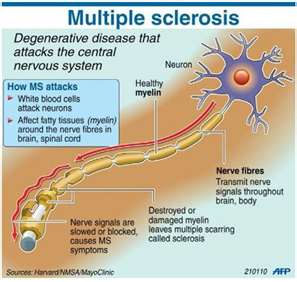