The recent victory of Rickie Fowler at Charlotte as the young American defeated world no. 1 Rory McIlroy and countryman D.A Points at the first hole of sudden death to win the Wells Fargo Championship was his first win on the PGA Tour.

McIlroy and Fowler first met as 18 year olds when they represented their countries at the 2007 Walker Cup.

The Northern Irishman having won just about every amateur event on his side of the Atlantic while Fowler was the number one amateur in the world at the time and was doing the same thing on American soil.

Since that time McIlroy has surged forward in leaps and bounds and has no doubt become the real deal winning five times including his first Major win at the US Open in 2011.

But last October Fowler stepped up to the plate, rolling McIlroy at the Oneasia Tour’s Korean Open by six shots for his first professional victory and really it was a matter of time before he did the same on home soil.

When McIlroy was asked about the emergence of Fowler, who is also 23, McIlroy said: “I think it was great for the game of golf that Rickie won. It’s great to have characters like that that are playing well, and he engages with the fans really well, and he’s a really popular player out here.

“We’ve known each other since playing some amateur golf together. I developed a really good relationship with him at the Walker Cup in 2007. I felt like he was the best player on that team at the time, and he was also the nicest guy.”

For Fowler, his recent victory in a PGA tour served as a notice that he is in contention of the game, that an emerging rivalry of him and McIlroy is in the offing. 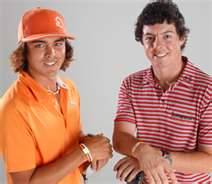