World no. 1 Novak Djokovic hopes that the blue clay surface installed for the Madrid Masters will not cause injury to players.

“The hope of all players is that we won’t have injuries and have a decent week of tennis,” said Djokovic.

Djokovic joined with Rafael Nadal in criticising ATP executives who didn’t bother to consult with at least their top-shelf players.

“The only disappointing thing from a player standpoint is that it was decided without players agreeing to it,” said the Serb.

The proposal for the change was made by billionaire Madrid impresario Ion Tiriac. It is on a one-year trial, with the event saying its purpose is to help spectators see the yellow ball more clearly on the blue surface.

“The blue clay surface makes this year different,” said the 2011 Madrid champion. “It is the first time in history. It will be interesting for everyone to see what happens.

“There is a certain difference compared to red clay, but we have it (blue) in front of us. I tried to prepare for it as well as I could. But it’s the same for everyone.”

Nadal will make his debut on the event’s new surface on Wednesday against Nikolay Davydenko. 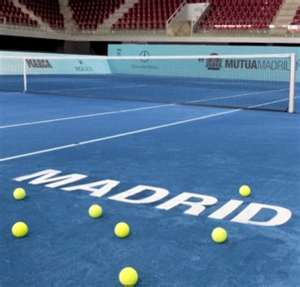