For what could be a turn around of Yemen President Ali Abdullah Saleh’s intention to slow down the momentum of his ouster due to mounting protests against him.

The embattled Yemen president accused the United States, his closest ally of instigating the destabilization plot against him.

Hundreds of thousands rallied in cities across Yemen against Saleh’s government. Saleh has been seen as a weak but an important ally of the US against Al Qaeda, accepting ten millions of dollars in US aid and allowing Americans drone strikes on Al Qaeda targets.

In a speech by Saleh before about 500 students and lecturers at Sanaa University, he claimed that the US along with Israel is behind the protests movement.

Anti US sentiment remains strong in Yemen, as elsewhere in the region and Saleh’s comments appeared to be an attempt to discredit the protesters by suggesting they are serving foreign interests.

However, the Obama administration rejected Saleh’s claims, and in response the White House called on Saleh to focus on implementing the political reforms demanded by his people instead of passing the blame to others. 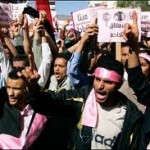