Foot and mouth disease (FMD), is a highly infectious vesicular disease of cloven footed animals, primarily of cattle, swine and occasionally of sheep, deer and bison.

Outbreaks of this disease in previously FMD free countries have caused billions of dollars in economic losses related to eradication efforts and trade bans.

Losses from death are insignificant though, the disease has great economic importance because animals are left by its poor condition for meat, milk production and breeding purposes.

The disease spreads rapidly directly or indirectly through contaminated feed, water, in milk or in garbage containing contaminated meat. The saliva of the infected animal carries the causative agent. It is caused by one of the smallest filterable viruses and is not stable and may form many types or subtypes.

With this development, the US Department of Agriculture (USDA) scientists, have been able to make a breakthrough in identifying specifically where the FMD virus starts infection in cattle.

This discovery could lead to the development of new vaccines to control and potentially eradicate FMD. The discovery was made by scientists with the USDA’s principal intramural scientific research agency.

Jonathan Arzt, the veterinarian officer, Luis Rodriguez, research leader and microbiologist Juan Pacheco, have found that after just six hours of exposure to the FMD virus through the cow’s nasal passages, the virus selectively infects epithelial cells in the nasopharynx, a specific region of the back of the cow’s throat.

Because of this discovery, they can now begin an effort to develop better vaccines and biotherapeutic counter measures against the disease, according to Arzt.

FMD infected animals have symptoms of blisters, sores which appear on the mucous membranes of the mouth, tongue and on the skin around and between the hooves.

With the seven different types of FMD viruses, there is no universal FMD vaccine against the disease yet. With more than 60 subtypes, vaccine must be highly specific, that match to the type and subtype present in the area of an outbreak, to protect animals against developing the disease.

Blocking the initial site of infection may be the most effective way to achieve complete protection. Savants are now conducting further research to answer questions about why the particular epithelial cells are susceptible, and how the initial infections can be blocked. 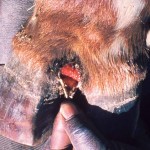 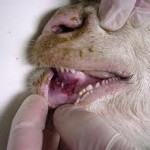