Like humans, the light skinned whales seemed to have the most difficulty dealing with the sun. Blue whales had more severe skin damage than their darker skinned counterparts, fin whales and sperm whales, even though the latter spend so much time at the surface.

The sea mammals would be particularly vulnerable to the bad effects of sunburn because they spend extended periods of time on the ocean’s surface to breathe, socialize and feed their young. Since they don’t have furs or feathers, it effectively means they sunbathe bare.

Photos were taken of the whales to trace any visible damages and samples were taken and collected to investigate the state of their skin cells.

According to scientists, some whale species off the Mexican coast are showing signs of severe sunburn that may be caused by ultraviolet radiation exposure due to the inability of ozone layer to block the damaging effects of the sun’s ultraviolet rays.

Martinez Levasseur who works at Zoological Society of London, spent three years studying whales in the Gulf of California, the abounding body of water which separates lower California peninsula and mainland Mexico.

Her study, published in the Proceedings of the Royal Society, seemed to confirm suspicions first raised by one of her whale watching colleagues. The mammals were showing lesions associated with sun damage, and many of their skin samples revealed patterns of dead cells associated with exposure to the powerful ultraviolet radiation emitted by the sun.

The findings highlight the possible dangers associated with the depletion of the ozone layer, which help protect the earth from the destructive effects of the sun’s ultraviolet rays.

The depleting of the ozone layer is caused by chemical compounds known as chlorofluorocarbons (CFCs). While the emission has since been regulated, the extent to which the ozone is recovering is still under scrutiny. 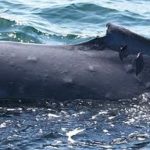 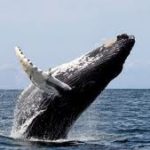 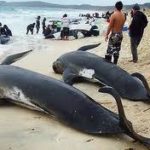