Mildred “Patty” Baena, whom Arnold Schwarzenegger has a relationship with, never told her son that his father was her former household employer and the leading star of the movie, ‘The Terminator.’

It was a well guarded secret that Baena kept it to herself, even her mother Evelyn Peña, 76, and her sister, Miriam Peña didn’t know who the boy’s dad was, who along with her, all work for the Schwarzenegger’s household.

With that shocking revelation, both the mother and sister of Baena are upset with her and instead feels sympathy for the wife, Maria Shriver.

According to Baena’s neighbors at Bakerfield, the boy has no idea about the truth and he would even refer to Baena’s current boyfriend, Alex Aguiar, as his dad.

While Baena failed to tell the boy and her family about the youngster’s real dad, the maid did tell Schwarzenegger he was the dad while the boy was still a toddler.

After the former California governor has learned that he was the boy’s father, Schwarzenegger showered the boy with gifts and put a down payment on his family’s home a source close to Baena’s family said. 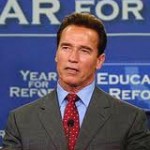