The name of the band at the moment is Super Heavy. The group are working their first video and a record together, and now they are on the verge of talking to major labels hoping to secure a music deal soon.

Though each member has a very distinct and different style from each other, it is very interesting to note of how they were able to blend up together and produced a unistyle brand of music out of rock, new wave, jazz and reggae.

The legendary rocker claims he is just having fun in the recording studio with the other musicians at the moment and they aren’t taking it too seriously.

As of now they enjoy playing together and they all thought it would be interesting and great fun to go into the studio and play some music. 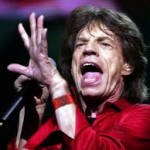