In most parts of the world, mountain glaciers are waning in response to global warming but the situation in Karakoram mountain range, home to the world’s second highest peak, K2, and straddling parts of China, Pakistan and India, defy the global trend and its glaciers getting thicker instead, say researchers.

The puzzling find has baffled scientists and comes at a time when glaciers in other parts of the region, and across the world, are shrinking.

Scientists have found it almost impossible to study the glaciers on the ground, for the region lies at great altitude in a border area, and access is hampered by snow avalanches and glacial debris.

French scientists from the National Center for Scientific Research and the University of Grenoble, were forced to rely on satellite images, to study the region, because much of the Karakoram range is inaccessible.

They compared observations made in 1999 and 2008 and found a marginal mass increase.
They estimated the glaciers had gained between 0.11 and 0.22 meters of ice each year.

In a commentary also carried by Nature Geoscience, Graham Cogley of Trent University in Ontario, Canada, said it was unclear why the Karakoram had so far been spared the impact of warming.

“It seems that, by a quirk of the atmospheric general circulation that is not understood, more snow is being delivered to the mountain range at present, and less heat,” said Cogley.

The French researchers are unsure why the region defies the global trend, but they know from other studies in other parts of the world that in very cold regions, like the Karakoram range, climate change can cause extra precipitation, which then freezes and adds to ice mass.

Stephan Harrison, associate professor in quaternary science at the UK’s University of Exeter, said the new research had showed there is ‘considerable variability’ in the global climate and in how glaciers respond to it.

The Karakoram glaciers are also unusual because they are covered with thick layers of rock debris, which means their patterns of melting and mass gain are driven by changes in that debris as well as in the climate.

Harrison said much of their mass gain also comes from avalanches from the high mountains surrounding them.

“Apparently, the situation in the Karakoram is a little different (from elsewhere), which means that the glaciers are stable for the time being,” according to lead researcher, Julie Gardelle of the University of Grenoble in southeastern France.

“But it does not detract in any way from the evidence for overall global warming,” she cautioned. 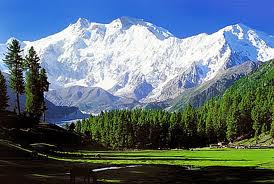