Albert Einstein’s theory of special relativity, proposed in 1905, states that nothing in the universe can travel faster than the speed of light.

Last year a group of Italian physicists claim that they have shown tiny particles in an experiment that could travel faster than the speed of light in a vacuum.

They shocked the scientific world by their claim only to admit later that its finding was a mistake due to a faulty wire connection.

It has been more than 100 years ago that Einstein formulated the theory of special relativity, proposed in 1905 which states that nothing in the universe can travel faster than the speed of light in a vacuum.

Not until last year that a group of Italian scientists at the CERN lab near Geneva claimed they had recorded neutrinos, a type of tiny particle, traveling faster than the barrier of 186,282 miles (299,792 kilometers) per second.

Now it seems Einstein’s reputation has been restored after a source close to the experiment told the US journal Science Insider that “A bad connection between a GPS unit and a computer may be to blame.”

Scientists at CERN claimed that neutrinos arrived 60 nanoseconds earlier than the 2.3 milliseconds taken by light.

The report in Science Insider said the “60 nanoseconds discrepancy appears to come from a bad connection between a fiber optic cable that connects to the GPS receiver used to correct the timing of the neutrinos’ flight and an electronic card in a computer. ”

Scientists across the world agreed if the results were confirmed, that it would force a fundamental rethink of the laws of physics.

Edward Blucher, chairman of the Department of Physics at the University of Chicago, said the original finding would have been breathtaking if it had been true. As it was, the research inspired many spirited discussions, if few believers.

“I don’t think I met anyone who said I bet it’s going to be true. I think the people on the experiment worked as carefully as they could and I think they ran out of ideas of what could be wrong and they decided to present it,” he said “Maybe they should have waited a few more months,” he added. 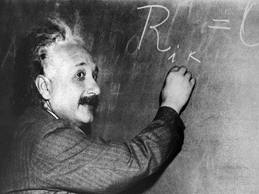