US oil contract earlier fell by more than 2.5 percent before recovering to be slightly higher in early US trading and precious metals lost value, with silver prices falling by as much as 5 percent.

Bin Laden’s death could reduce security risks and would help lift consumer sentiment in the US, according to analysts.

But they warned that it would do little to ease the longer-term risks hanging over the US and global economies.

The Dow Jones Industrial Average was up 0.5 percent in early trading while in Asia, Japan’s Nikkei 225 index gained 1.6 percent, closing above the 10,000 level for the first time since mid-March, when the country was struck by a deadly earthquake and tsunami.

In Europe, London’s FTSE 100 was closed for a public holiday, but other bourses, including those in France and Germany, traded higher.

Several stock markets in Asia, including in China, Hong Kong, Singapore, Malaysia and Thailand, were also closed for a public holiday on Monday.

Oil prices fell in early trading in Europe, but rallied after they opened in New York.

They have been pushed to near record levels in recent weeks by the fighting in Libya, and political instability in the Middle East. 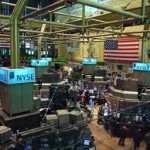