In 2011, a record of 450 rhinos were killed by poachers in South Africa, the Department of Environment Affairs says.

It has soared in recent years to meet the demand for their horns in Asian traditional medicine, especially in China and Vietnam, where they are thought to have powerful healing properties.

South Africa has become the center of the rhino trade because 70 to 80 percent of the global population or about 20,000 animals have come from this region of the continent.

South Africa blames the surge in poaching on international syndicates who slip across the vast land borders to kill the rhinos, and then smuggle the horns to Asia.

In its recent response to address the problem, the government of South Africa is intensifying efforts to improve border management in an attempt to deal with cross-border crime syndicates and to curb poaching, Justice Minister Jeff Radebe said.

Last year troops were deployed along the Mozambican border, many of them inside the world-famous Kruger National Park where more than 200 rhinos were killed last year.

Radebe said four military companies would be sent to the borders with Zimbabwe, Swaziland and Lesotho.

“The deployment includes army engineers who are conducting repairs and maintenance on the Zimbabwe-Mozambique border fence, which is approximately 140 kilometers (85 miles),” Mr Radebe said.

Troops were first deployed on April 1, 2011, along the Mozambican border, many of them inside the world-famous Kruger National Park, one of South Africa’s premier tourist draws that has become a magnet for poachers.

Despite their sometimes deadly clashes with poachers, the military deployment has so far failed to stop the poaching crisis.

The country’s government has commissioned a study into whether legalizing the trade in rhino horn could help reduce poaching. 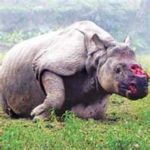