Bill Haas beat his fellow Americans Phil Mickelson and Keegan Bradley in a gripping sudden-death playoff at the Northern Trust Open final round.

The 29 year old Haas looked like winning the tournament in regulation when he sank a curling 43-foot birdie putt at the second extra hole, the drivable par-four 10th, to seal victory at Riviera Country Club with a final round 69 to finish seven under.

But Mickelson and Bradley birdied the last to force a sudden-death play-off.

Haas receive a prize for nearly US$ 1.2 million in clinching the title. “I never expected to make a 40-footer, and especially in that situation,” a beaming Haas told reporters.

The victory was a fourth on the PGA Tour for Haas, leaving him five short of the career total of his father, Jay.

Mickelson, 41, and Bradley, 25, were tied on seven under going into the final day in California, but they could only shoot level par.

And, with US PGA champion Bradley’s challenge fading too, Haas looked set to triumph.

British world number one Luke Donald, making his first appearance on the 2012 PGA Tour, closed with an eight-bogey 78 to share 56th place at seven over. 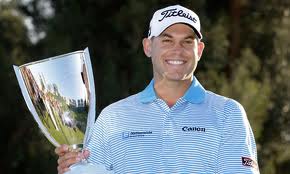