The European Commission promoted the European Union (EU)funded ROBOCAST project as a breakthrough in robotic neurosurgery that could in future help treat tumors, epilepsy, Parkinson’s disease and Tourette syndrome.

The stable handed robot, guided by a surgeon, has 13 types of movement compared to four available to human hands during minimally invasive surgery.

It has allowed surgeons to assess tissue and feel the amount of force applied during surgery, the European Commission said in reporting the EU-funded ROBOCAST project.

So far the robot has only been tested on dummies , performing keyhole neurosurgery, in which a probe enters a tiny hole in the skull to manipulate tissue or collect blood and other fluids.

Marking European Robotics Week, the EU said it was funding a parallel project involving three robots to assist surgeons operating on patients who must stay away during neurosurgery.

The EU’s executive Commission has already spent US$ 532 million (400 million euros) in around 100 robotics projects. 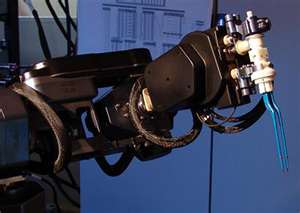