Krav Maga, “contact combat” in Hebrew and whose premise is “blow your assailant away, then run” is enjoying an unusual burst of popularity. It is a fighting system used by police and the military and now is taught to children.

But in recent years, the technique has been introduced as a martial arts class. Among the pupils are children, women who want to protect themselves, security guards at psychiatric hospitals and teenagers scared of school bullies.

A web search shows hundreds of Krav Maga studios opening in recent months in the US. One of them, Krav Maga Worldwide in Los Angeles and it has certified some 240 training centers around the world, which each having anywhere from a few hundred to a few thousand members, half of them women.

At Premiere Martial Arts around 100 children train in the fine art of tearing attackers to pieces. Tuition is US $2,000 dollars a year for unlimited classes. It is all about fighting dirty in the interest of saving your own life.

Krav Maga is taught regularly to Israeli school children and is approved by the Israeli Ministry of Education. The spread of Krav Maga follows its quiet adoption by American Police Departments. Government agencies and the military have been training in the martial arts technique for at least a decade.

Jamie Arute, a Krav Maga instructor, he reviewed the basics in a 45 minute class with his children pupils who were sweating out. He told them to always back away facing your attacker before turning to run.

If a stranger grabs you by the wrist, make a ball with your grabbed hand, bring your other hand to grab the ball and pull up quickly. Then turn and run, a technique surprisingly working well. 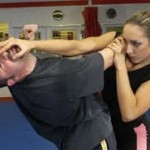