Rafael Nadal became the seventh to complete a tennis tournament Grand Slam sweep by beating Novak Djokovic, 6-4, 5-7, 6-4, 6-2 in a match interrupted by a thunderstorm, a day after it was postponed by rain.

“I think for the first time in my career I played a very very good match in this tournament,” Nadal said. “That’s my feeling I played my best match in the US Open out there at the most important moment.”

After winning Wimbledon and the French Open early this year, Nadal joined Roger Federer,Rod Laver and Pete Sampras as the only men to win three Slams in a row in the Open Era that began in 1968.

Rain pushed the men’s final from Sunday to Monday for the consecutive year, and play was interrupted for nearly two hours during the second set.

When they resumed Djokovic took that set, the only one Nadal lost in the tournament. But the number one Spaniard quickly took a lead in the third set and never let it go.

“He took it away,” Djokovic said, “and he never gave me a chance to go back.” Djokovic, whose lone Grand Slam title came at the 2008 Australian Open, had won his three prior matches against Nadal, all on hard courts, but has never defeated the Spaniard in a final or at a Grand Slam event. 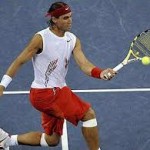