There is an alternative energy vision that an array of underwater turbines in vast farms will be operating deep underwater cranking out power to a substation on shore.

This is a water powered turbines that spin in the current as the tides come and go, turning generators to make electricity that is clean but they are hopeful to be low in production cost.

Tides come and go twice a day everywhere around the globe. However, it needs at least tides that are very high and the tidal current strong to make the most sense to be an efficient source of clean energy.

Tidal power is not a new idea though, the system previously used represent an older approach which is similar to a hydroelectric plant, it employs barrages or dams to hold back the high tide, then release through the turbine when the tide goes out.

Dam building is extremely costly and it’s not environmentally friendly because it can pose and can create widespread environmental problems that may alter our ecosystems.

While others and the company currently trying to develop tidal energy has suggested that the placing of turbines directly in the tidal current is potentially much cheaper and more environmentally sound.

The underwater approach is still in its infancy, the possibility of a tidal plant that would feed significant power to the grid is at least a few years away. 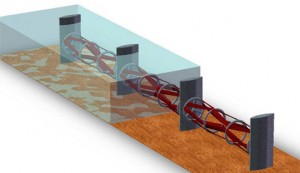 In many ways tidal power is similar to that of wind power. Tidal researchers have learned a lot from work on wind power. Flowing water behaves like flowing air, but because water is dense it contains for more energy in a given volume.

That gives it an advantage over wind because the turbines can be much smaller, according to Paul Jacobson, a project manager with the Electric Power Research Institute.