R.E.M. was formed in Athens, Georgia in the U.S. by Michael Stipe, Peter Buck, Mike Mills, Bill Berry in 1980.

The band was credited for helping launch college radio with songs such as “Radio Free Europe.”

The group found fame with a string of albums, notably 90s hits ‘Out of Time’ and ‘Automatic for the People.’

Four of R.E.M.’s albums in the 1990s went platinum in the U.K., peaking with Automatic For The People, which sold more than 1.8 million copies.

In the United States, three of the band’s albums were certified quadruple platinum, representing sales of 4 million, according to the Recording Industry Association of America (RIAA).

R.E.M. became one of the more forceful voices of 1990s rock, and came along around the same time as another rock quartet, U2. However,U2 managed to maintain and increase its popularity over the years, R.E.M. stumbled commercially in recent years, and their hits dwindled.

R.E.M. has often used their music and power as a band to carry a message.

In 2009, REM was one of a number of bands to form the National Campaign to Close Guantanamo, referring to the U.S. prison in Cuba.

Many of the artists who joined the campaign were angry that their music had reportedly been used as an interrogation tool in the jail.

Over the years, R.E.M. influenced and nurtured many other bands – giving exposure to alternative rock acts like Radiohead, Wilco and 10,000 Maniacs through support slots through their tours.

But after 31 years of their working together the group has decided to call it a day.
“During their last tour, and while making the song `Collapse Into Now’ and putting together this greatest hits retrospective, they started asking themselves, `What next?'” Mills said.

According to their account, working through their music and memories from over three decades was a hell of a journey. They realized that these songs seemed to draw a natural line under the last 31 years of their working together.

The band has continued to create music that resonated with critics and their core group of fans, but Mills said, the band was running out of ideas. And this must have aggravated for the band’s demise.

REM won three Grammy awards in 1992, and the best international group trophy at the British awards in 1993 and 1995.

The band was inducted into the Rock and Roll Hall of Fame in 2007. 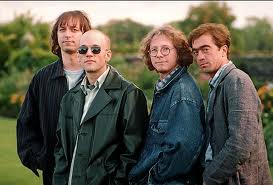