Unsafe abortion is one of the main contributors to maternal death worldwide, and refers to procedures outside hospitals, clinics and surgeries, or without qualified medical supervision.

The World Health Organization study suggests global abortion rates are steady, at 28 per 1,000 women a year.

Women are more vulnerable to dangerous infection or bleeding in these environments.

However, the proportion of the total carried out without trained clinical help rose from 44 percent in 1995 to 49 percent in 2008.

In developing countries, particularly those with more restrictive abortion laws, most abortions are unsafe, with 97 percent of abortions in Africa described this way.

In comparison, 95 percent of abortions in Latin America were deemed unsafe, falling to 40 percent in Asia, 15 percent in Oceania and 9 percent in Europe.

In the developed world, the proportion of pregnancies ending in abortion fell from 36 percent in 1995 to 26 percent in 2008.

Countries with restrictive abortion laws did not have a corresponding decrease in abortion rate – in some cases, the reverse was true.

Researchers used surveys, official statistics and hospital records to compile the figures often a difficult task in countries where abortion is illegal.

They concluded that while the abortion rate had fallen since 1995, that drop had now leveled off, and overall, the rise in world population meant that there were 2.2 million more abortions in 2008 compared with 2003.

Professor Beverly Winikoff, from Gynuity, a New York organization which pushes for access to safer abortion, wrote in the Lancet: “Unsafe abortion is one of the five major contributors to maternal mortality, causing one in every seven or eight maternal deaths in 2008.

Kate Hawkins, from the Sexuality and Development Program at the Institute of Development Studies, said: “Whether it is legal or illegal, women will seek abortions and obtain abortions.”

“This study showed that in 2008, 86 percent of abortions took place in developing countries and that nearly half of all abortions worldwide were unsafe in 2008.

Dr. Richard Horton, the Lancet’s editor, said: “These latest figures are deeply disturbing. The progress made in the 1990s is now in reverse.

“Condemning, stigmatizing and criminalizing abortion are cruel and failed strategies.” 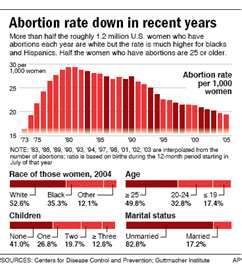