The one sided demolition of Manny Pacquiao on Antonio Margarito makes one to wonder who Pacquiao to fight next.

Pacquiao-Mayweather is the fight that everyone wanted to see. But it seems that Floyd Mayweather is sticking to his ground not to engage with Pacquiao anytime soon, for the simple reason that he gives more credence in protecting his nonsense legacy that he would rather come up being the undefeated champion of the kingdom of the blind legacy, where the one eyed he is, is the king.

By doing so, he can never gain the respect of a true champion if he continues to protect his unblemished record by not fighting the best.

By now, he should take it out from Pacquiao that honor if he really wanted to be remembered to be among the GOAT.

Unfortunately, no signs yet that is coming from Mayweather that a fight with Pacquiao is going to happen.

There are four names that have surfaced as the logical choice as the next opponent of Pacquiao and they are: Shane Mosley, Juan Manuel Marquez, Sergio Martinez and Andre Berto.

Bob Arum has his own reasons why he wanted Mosley as the next opponent of Pacquiao because of the economic profitability of the bout as compared to a Pacquiao-Marquez or a Pacquiao-Berto.

As everyone has to know that professional boxing is business. According to Arum, a fight with Mosley, which has a considerable fan base, is a a lucrative proposition to do in terms of the gate and pay per view revenues that can be derived from the bout.

Besides Pacquiao has never fought an African-American boxer whose styles are typical for most black reigning champions and contenders in the league since the time of Muhammad Ali.

If Pacquiao can convincingly defeat Mosley more than that of Mayweather did, this can boost his resume’ and accordingly seal the Pacquiao’s legacy that he is indeed a much superior fighter than Mayweather who is also an African American fighter, thus nobody would loaf around and talk that Pacquiao has not fought an African American Fighter of Mosley’s or a Mayweather’s caliber.

On the other hand, if Marquez is pitted with Pacquiao as Golden Boy Promotions are pushing through, it cannot be that lucrative as Pacquiao-Mosley because Marquez being the Mexican boxing champion is not such a crowd drawer with the likes of Marco Antonio Barrera and Eric Morales which both have a considerable fan base respectively.

Barrera and Morales had been a consistent blockbuster in the gates and pay per view regardless of whoever they fight. Marquez however,lacks that charisma even to his own countrymen, his poor showing in the gates and in his recent fight with Katsidis is a good indicator.

Besides, the Pacquiao-Marquez trilogy has long been overdue. It should have been done earlier when Pacquiao was not yet in the welterweight which is now his comfortable weight.

Since Marquez needs the fight more than Pacquiao, Marquez need to go up in two weights from lightweight to welterweight which can be at his disadvantage and that was evident in his loss of that fight to Mayweather.

That is why Arum has proposed to the Marquez camp, that Marquez has to fight a top legitimate welterweight contender first as a warm up fight, prior to a crack with Pacquiao which makes sense.

Marquez motivation is more on monetary consideration that awaited him if he chooses to play the Pacquiao lottery which the hottest public commodity as of now and a consistent revenue generating machine at that. Every top contenders in the jr. welterweight, welterweight and to jr. middleweight, are looking up to a crack with Pacquiao for the sweepstakes.

The least that Marquez can earn with Pacquiao is a duplicate of what he had earned from his last fight with Mayweather which is not bad. He would never earn it in the lightweight division even in a championship fight.

Besides, Marquez realizes that at 38, his days are numbered and soon he will be retiring from the sport, and the only way that he can hit it big time is a clash with Pacquiao.

On Pacquiao’s side he always say that he fights whatever laid on his table by his promoter Arum but if Pacquiao do his way and if Mayweather is still reluctant to fight him, he wanted to engage with Sergio Martinez, the Super Middleweight champion, for the ninth division title which is more enticing to him because of the honor that comes along with it which is now much more impossible to replicate by anyone except by him.

Pacquiao has sensed right away that Martinez style suits his taste and he has the key to overwhelm him in the ring. But of course his approach would no longer be the same where he allowed himself to stay in the ropes with Margarito absorbing those big shots from him, that almost pin him down.

Pacquiao knows that a clash with a bigger foe like Martinez he could not afford to be at the receiving end as what he did in his recent fight with Margarito. He has learned a valuable lesson from them and this time he keeps it a point to stay at the middle of the ring if ever he wanted to win decisively against Martinez.

The problem now, is that they have not yet agreed on the acceptable catch weight to reconcile their differences considering the weight disparity of the two future protagonists.

As of this writing, it has been set aside to give way the possibility of a Pacquiao- Mosley bout which is to be held tentatively in April.

For Andre Berto, now is his time to engage more and more top welterweight contenders like Clottey, Margarito, Cotto or Mosley into his resume’ before he can be considered a deserving candidate for a Pacquiao fight. 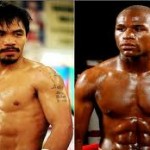