Lambanog has been known to be around before the Spaniards came to the Philippines. Since that time, the archipelago inhabitants had already been enjoying the potent effects of the native spirits of tuba, tapuy and lambanog.

The aforementioned native brews are more than enough to stir the avid drinker’s senses. Despite of its high concentration of alcohol, lambanog is unique, in the sense that it does not induced the much dreaded hangover.

It has shown to the world that the technology of wine making or the making of lambanog is already well and alive in this archipelago before it got its name to be known later as Philippines.

It is known technically as distilled coconut wine whose potent brew vouch for a clear but assertive punch. Aggressive but smooth to avid drinking aficionados.

The making of Lambanog is a product of Filipino ingenuity that start from the gathering of coconut sap locally known as tuba by climbing the palm coconut tree by sap gatherers as high as 15 meters. The gathered sap is then distilled in a stove where the large or giant wok is placed.

On top of this, is a tank and then another wok. Boiling the sap makes the steam rise and get in contact with the kettle on top containing cold water. The resulting sweat from this condensation process is collected and condensed into lambanog.

In distilling tuba it makes lambanog more expensive considering that approximately 6 liters is required to make a liter of lambanog.

Flavored concoctions for lambanog has gained popularity to drinkers with such a discriminating taste. Flavor like of apple, pineapple and strawberry are some of the variants that has been made to make the taste enticing.

Lambanog is often made into cocktail by mixing it with carbonated drinks. Another way of enhancing its flavor is by adding raisins and storing the brew for at least a week in a glass container or a jar. Anisado is made by adding anise seeds to plain lambanog.

Production of this distilled coconut wine is a thriving business in some provinces of Luzon, particularly Quezon Province where the best lambanog comes from. The villagers in this province have a cache of lambanog stored in jars. 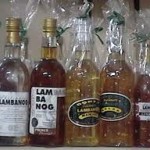 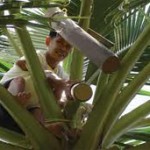