A team of surgeons from the University of Maryland gave 37-year-old Richard Norris of Hillsville, Virginia a new face, a transplant that included not just the facial tissue from the hairline to the neck, but also the upper and lower jaws, teeth and a portion of tongue.

Norris was accidentally shot in the face in 1997 and lost his nose, lips and most movement in his mouth. Since then, he has had multiple life-saving and reconstructive surgeries but none could repair him to the extent where he felt he could return to society.

For a decade and a half he has lived as a recluse, his face covered by a mask after his face being shattered by the accident. By day he hid from the public, shopping only at night to avoid the curious stares of children and adults.

Six days after the surgery, he could already move his tongue and open and close his eyes and was recovering much faster than doctors expected.

To ensure Norris would retain maximum function of his facial expressions and movements, doctors gave him a new tongue for proper speech, eating, and chewing, normally aligned teeth, and connected his nerves to allow for smiling.

“He’s actually looking in the mirror shaving and brushing his teeth, which we never even expected,” said Dr. Eduardo Rodriguez, associate professor of surgery at the University of Maryland School of Medicine and head of the transplant team, who spoke at a press conference.

The operation seems to be the most aesthetically successful to date, according to photographs and video shared with reporters at a news conference.

Norris is the first full face transplant recipient in the United States to retain his eyesight.

“We concealed all the lines so it would give him the most immediate best appearance with minimal touch-ups down the road,” Rodriguez said later in an interview.

Before the surgery, Norris, who is unmarried and lives with his parents in a rural area, was been unable to find a job because of his appearance, a hospital spokeswoman said.

The transplant was ‘an amazing feat,’ said the dean of the School of Medicine, Dr. E. Albert Reece at the press conference.

“It’s also an unprecedented and historic procedure that we believe will change, if you will, the face of medicine now and in the future,” Reece said.

Norris may also benefit from more than a decade of research on immunosuppressing drugs.

University of Maryland scientists discovered that by transplanting the jaw as well as the face, they would need lower levels of the medications to keep the body from rejecting the new tissue and bone, said Dr. Steven Bartlett, chair of the Department of Surgery at the University of Maryland Medical Center.

The surgery involved 10 years of research funded by the Department of Defense’s Office of Naval Research and will serve as a model for helping war veterans injured by improvised explosive devices in Afghanistan, the university said.

About 100 doctors, scientists and other university medical staff ranging from plastic surgeons to craniofacial specialists teamed up for the operation. 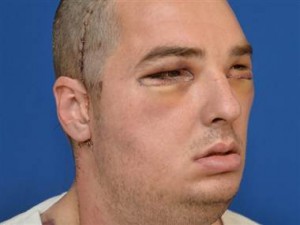 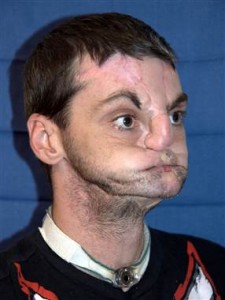