The former NBA player Dennis Rodman is in dire straits having owed in back payments over child and spousal alimony.

The child support is for his two children ages nine and 10, he had with his third wife, Michelle Rodman. He reportedly owes an additional US$ 51,441 in spousal support.

Rodman appeared in court in Orange, California where his attorney, Linnea Willis asked that a contempt of court order against the former player be dismissed. The contempt order stems from allegations that Rodman is behind in payments on child support.

Willis claimed Rodman was ‘extremely sick’ and that his marketability was diminishing with age and illness, making it impossible for the five-time NBA champion to pay the US$ 5,000 he owes monthly for one child from another relationship, in addition to the US$ 4,500 he owes Michelle Rodman every month.

Jack Kayajanian, an attorney for Rodman’s ex-wife Michelle, has said the 50-year-old Rodman owes at least US$ 750,000 in spousal support and child support for his two children with Michelle.

Willis said her client disputes the figure, which is based on a calculation of US$ 50,000 in payments per month. That was based on inaccurate estimates of Rodman’s income and represents too high a figure for ‘even the richer celebrities,’ she said

Orange County Superior Court Commissioner Barry Michaelson told the NBA Hall of Famer he faces a possible 20-day jail stint for contempt of court unless he comes up to settle child and spousal support he owes his ex-wife by May 29, though it’s likely he could get community service time instead.

Either way, Rodman’s attorney and his financial advisor say, their client’s broke.

When the former basketball star’s third wife, Michelle Rodman, sued him for divorce in 2004, Rodman sold the beach pad. At the time, he listed his previous year’s income as US$ 570,000.

He said he had US$ 3.4 million in property and US$ 1.45 million in stocks and bonds. But, he said, maintaining his hard-charging lifestyle cost him more than US$ 31,000 a month.

The couple have spent several years trying to reconcile, but the marriage was dissolved a few weeks ago after his wife petitioned the court again.

He referred to Michelle as his ‘wife’ during the hearing and said the two get along and had dined with their two children at an Outback Steakhouse on Monday evening.

Rodman, who lives in Miami, said their dispute has ‘never been a hate thing. We’re not like that.’ He added that the two were ‘just trying to get it done.’ 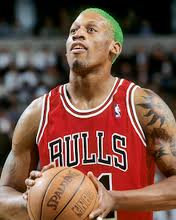