In the upcoming general assembly, the Philippines is seen to be declared free from the deadly foot-and-mouth disease (FMD) by the World Organization for Animal Health or Office International des Epizooties (OIE).

Agriculture Secretary Proceso J. Alcala said that the expected favorable OIE declaration, will boost the Philippines to gain a foothold in the global meat market, particularly exports of pork and poultry meat products.

The announcement is expected to be formalized in May during the 79th General Session of the World Assembly of OIE Delegates in France.

Alcala said they are looking at exporting Philippine pork products to South Korea, where there is a currently an FMD outbreak and where pork production is expected to decline by 760, 000 metric tons this year.

No cases of FMD have been reported in the country since the last recorded outbreak on Dec. 28, 2005.

In 1995, the dreaded disease struck 27 provinces of the country, setting the highest number of recorded outbreaks in one year with 1,553 outbreaks. 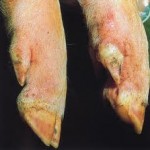