According to medical experts, emphysema is a form of chronic obstructive pulmonary disease (COPD), caused by loss of elasticity and dilatation of the lung tissue.

Most people who are diagnosed with emphysema are long term cigarette smokers. Symptoms may not occur until middle age when the individual’s ability to exercise or do heavy work begins to decline and starts to experience productive cough.

In emphysema, the lungs become less and less efficient because of progressive damage to the millions of alveoli or air sacs at the ends of bronchioles in the lungs .

The healthy lungs have an elastic, spongy texture, so they contract and expand fully. If the alveoli become stretched or ruptured, the elasticity of the lungs is gradually destroyed. A person with emphysema cannot exhale without great effort.

Working in an environment polluted with chemical fumes or non hazardous dust may increase the risk of COPD. In rare cases, emphysema is due to a deficiency of blood protein called antitrypsin.

However, the overwhelming majority of cases are related to smoking.
Smoking causes chronic low level inflammation of the lungs, which increases the chance of developing this progressive in due time.

The main symptoms of emphysema is shortness of breath. If you wheeze, cough and bring up phlegm, these are symptoms of bronchitis and asthma, which frequently co-exist with emphysema.

Some people are particularly susceptible to emphysema because of an inherited defect in a factor in the blood serum that protects the lung tissue in case of an infection. Without that factor, infections that otherwise are successfully controlled by the body defenses, cause a loss of the lung tissue.

People whose jobs require exceptional use of lungs power like glass blowers or wind instrument players are also highly susceptible to emphysema.

There is also risk of chest infections such as pneumonia that can be life threatening and pneumothorax, that is when the air gets into the pleural space between the two layers of the pleura, a membrane that surrounds each lung.

If you are experiencing breathlessness, you should immediately consult a physician. Your physician may request you to undergo spirometry to measure forced expiratory volume to demonstrate airflow obstruction and to make the diagnosis. In a person who has chronic obstructive pulmonary disease, the test shows reduced airflow during a forceful exhalation.

To prevent developing a disabling shortness of breath that is brought about by emphysema, the following are medical experts’ recommendations of what you should do.

*** Avoid any contact with tobacco. If you are a smoker, quit smoking. Avoid areas where people smoke. Do not allow smoking in your home, your car or anywhere near you.

*** Avoid perfume or anything containing fragrance.

*** Avoid staying in polluted areas. During housecleaning, leave the house to avoid allergen such as molds, dust, aerosol products and the likes.

*** Avoid in letting furry and feathered animals into your home.

*** If you are a workaholic, rest regularly and avoid stress.

*** Go on in a cleansing diet periodically, by taking in green leafy vegetables and fresh fruit juices.

*** Have a light to moderate regular exercise or any form of physical activities.

*** Eat a diet consisting of 50 percent of raw foods like salad and the other 50 percent should consist of soups, skinless chicken, fish and grain cereals.

*** Consume onions and garlic daily. Onions are good expectorants while garlic is known for its antibacterial properties.

*** Avoid foods that require a great deal of chewing such as meats and nuts.

*** Avoid fried and greasy foods, salt and all foods that may cause excess mucus to be formed in the gastrointestinal tract, lungs, sinuses and nasal cavity. 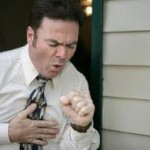