Jiabong is a town in Samar, is one of the identified areas in the Philippines where tahong or green bay mussel is widely cultured by its residents.

It has been considered as the green bay mussel capital of Eastern Visayas, supplying the biggest volume of tahong for Cebu, Davao and Manila.

Traditionally, the seafood can be prepared and served in various ways not discounting that it is one of the local favorites because of its palatability, its nutritive value and it is affordably cheap.

The health benefits of tahong or green bay mussel is that, it is rich in calcium, iodine, iron, phosphorus, copper, protein, carbohydrates and vitamins A, B B2 and C.

There is something that the lowly tahong could offer this time because it has now grown a potential industry that has diversified into the production of processed tahong.

Data from the Office of Provincial Agriculturist and Department of Trade and Industry in Samar showed that there were around 160 hectares devoted for tahong farming in Jiabong which produced a total of approximately 6,432 metric tons of tahong valued at Pph 32.2 million pesos (US $748,837 dollars)

With the bulk of quantity available, Jiabong residents were able to process them into tahong crackers, a crunchy snack made from ground tahong flesh mixed with flour and spices and then deep fried in oil.

The tahong crackers they have produced can be a healthy alternative snack food as it contains no artificial ingredients and preservatives.

Aside from producing tahong crackers, it can also be bottled into tahong adobo, bottled sisi or fermented and other marine products that can be marketed alongside.

The discarded tahong shells are not wasted at all because there are ready buyers in Cebu who are willing to take them as their materials in decorative shell craft making and the rejected ones goes to the feed millers where the tahong shells is pulverized and mix them with other ingredients in the formulation of livestock feeds.

The good thing is that tahong has been chosen as Jiabong’s commodity product for the “One Town, One Product” program of the Department of Trade and Industry (DTI) and the local government which helped not only the tahong processors but the tahong farmers as well in Jiabong in terms of marketing and promotions. 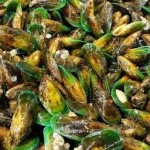